As a lifelong Chicago Cubs fan, it pains me to say this, but Congratulations to the St. Louis Cardinals on winning the World Series.  Although the cardinal on my quilt looks a bit like the ones on the St. Louis uniforms, it was inspired by the cardinals that visit the bird feeder outside our kitchen window.

I made Winter Cardinal (9 inches by 12 inches) as a donation to the Alzheimer’s Art Quilt Initiative.  Both of my parents suffered from Alzheimer’s, so supporting the search for a cure is very important to me.

The cardinal is made with thread painting on a background of hand dyed cotton and a piece of rust dyed cotton-silk for the branch.

This quilt is my entry for the 2011 Fall Blogger’s Quilt Festival. 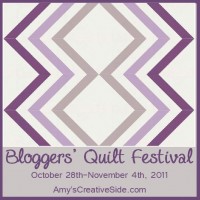 My mother was also a Cubs fan as a child.  Here are some excerpts from her journals and letters:

Monday, June 25, 1934–The Cubs didn’t go play baseball yesterday. But St. Louis did and lost and now the Cubs and St. Louis are tied for second place. The Cubs have still got a good chance to win the pennant.

Sunday, June 23, 1935—The Cubs lost today. I don’t know whether the Sox won or lost. I imagine they lost. They usually do!

Tuesday, August 10, 1937–The Cubs are way ahead of the Giants now and it’s almost impossible to lose the pennant now. I hope they lick the spots off the Yankees on the World’s Series.  (Note:  unfortunately, the Cubs finished the season 3 games behind the Giants and did not play in the World Series.)

Thursday, September 9, 1937–Daddy, momma and I went to the Cubs Ball Game at Wrigley Field. The Cubs played the Cards and lost 7-2. But we got some ball player’s autographs. We got “Rip” Collins, Bill Lee, Clyde Flaw, and Charlie Root!

October 10, 1945
Dear Daddy, Mom, and Esther,
Sure is cold here now. This morning there was ice in front of the Navy Dept.  We just heard
over the radio that the Cubs lost the World Series. Too bad! Maybe next year.

People ask me a lot about the values I got from playing for the Cubs for so many years. The value I got out of it was patience. A lot of people these days are not very patient.
Ernie Banks

The Cubs are due in sixty-two.
Ernie Banks

The Cubs are gonna shine in sixty-nine.
Ernie Banks

Ronald Reagan has held the two most demeaning jobs in the country; President of the United States and radio broadcaster for the Chicago Cubs.
George F. Will

20 thoughts on “A Cardinal for a Cause”